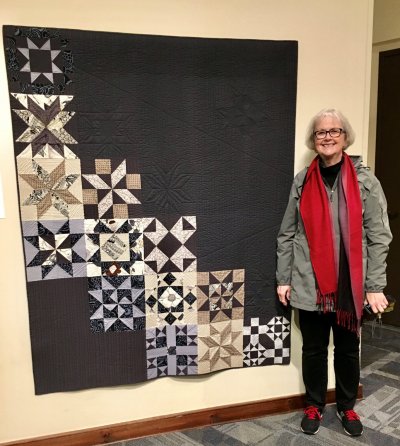 Part of an occasional series in which a MPQG member, chosen at random, is interviewed about her quilting journey. You can find all of the series interviews on our Member Interviews page.

An Interview with Marilee Kline
March 2018

One in an occasional series in which an MPQG member, chosen at random, is interviewed about her quilting journey.

I strongly believe in participating, says Marilee Kline. Yet her first quilt project involved thirteen months of solitary labor. I definitely started out traditional, she says. But now she embraces the alternate grids and negative spaces of modern quilting. Marilee’s quilt story, written over 40 years, touches the far ends of many spectra: solitary and participatory, individual and group, member and officer, south and north, traditional and modern, scissors and rotary cutters. But these end points on the ranges don’t exist in isolation. Master quilter that she is, Marilee joins them (chain-pieces them, perhaps?) into a harmonious continuum.

Like so many who grow up to be makers, young Marilee saw creativity in her own family. My mom sewed. She could sew with patterns, but she was really great at adapting, improvising. When I was little she was given a used and somewhat faded child’s coat. She took it apart, turned the pieces inside out and sewed it back together. It looked brand new. And she would do oddball things: she would tackle a motorcycle seat cover, or a lamp shade—you name it.

And I had a quilt that my grandmother gave me when I was about 13 years old. It was a Sunbonnet Sue, and I loved that quilt. It was on my bed. There was something about it: I loved the feel of it.

While Marilee learned to sew at a young age, it wasn’t until adulthood that she was inspired to make a quilt of her own. A friend of mine from King City moved to Pacific Grove, and she got involved with a quilting group. I didn’t even know she knew how to sew. And she had a quilt in a year. I thought, ‘if she can do it, I can do it.’

Marilee’s debut effort was unusual by present-day standards. My very first quilt, I’d seen it in Good Housekeeping. It was a printed sheet and you just quilted the sheet.

I ordered a frame from Sears catalog, Marilee continues. But I had no idea how to quilt. So every stitch, I actually went down with one hand and pushed up with the other -- the stab method. I’m left handed and I’m not really ambidextrous, but I could do each hand equally when it came to one going up and one going down.

It took thirteen months, in a room by myself, she says, with a rueful laugh. But I remain a quilter.

Unfazed by the duration and solitude of that first project, Marilee borrowed some quilting books from the library. Then, when The Wild Goose Chase quilt shop opened in Pacific Grove, she took a class. It just grew from there, she says.

It wasn’t long before Marilee added a social element to her quilting, and even a vintage one. I had formed a small quilt group in King City. We did a [project where] I put red and blue bandanas together and we quilted the bandanas to kettle cloth. But then we needed another project.

I had bought a quilt top for I think 40 dollars at the Moss Landing flea market. I [sandwiched it] and we decided how to quilt it, she recounts. It’s a movie star quilt. Across the edges of the quilt top, the original maker inscribed her name and address, and the words ‘Movie Star Contest 1933.’ Each muslin block was inked with line drawings--a rebus that provided clues to a movie star’s name. Marilee points to one block as example: the detailed images show a couple at the altar, a garden tool, and a Model T. You see, she says, It’s marry - pick - Ford. Mary Pickford.

It wasn’t until the California Heritage Quilt Project made a stop in Pacific Grove, in its quest to collect quilts that came to or were made in the state before 1945, that Marilee discovered the real origins of her quilt. The Movie Star Contest was a puzzle whose clues were published daily in the San Francisco Examiner during The Great Depression: readers submitted their answers to win prize money. One such reader, Mrs. C.S. Jackson of Lodi, transferred the clues to fabric, and made a quilt top of the entire puzzle series. She was probably the only one—it wasn’t a quilt contest at all. Her work is truly amazing.

Marilee herself stood to win a $100 prize for her entry to the heritage project. She didn’t, but her quilt was chosen to be documented. And then, they whittled all the quilts down to just 40, and those 40 went to four

different museums—art museums, because there was no quilt museum then—in California. My quilt was among them. And then all the quilts were compiled into a book. She holds up Ho for California: Pioneer Women and Their Quilts,[1] and opens it with a smile. This is my real claim to fame.

The small group in King City—the women who hand quilted that 1933 contest quilt—has grown up: it’s now a full-blown quilt guild, and one of four to which Marilee belongs. She counts them off: [I’m a member of the] King City guild, that’s where I live. The Monterey Peninsula Quilters Guild, I’ve belonged to this one forever. And then we have a summer home in northern California, and I belong to a guild there. And then the Salinas group—it’s not exactly a guild, but active seniors and we meet twice a month. People share tidbits, they share a pattern, and they show how to do something.

Put simply, Marilee says, I love quilt talk, and I’m inspired by other quilters. I’m a believer in small quilt groups, and I am a strong proponent of belonging to a quilt guild.

And Marilee does far more than simply belong: she makes things happen. I believe in participating, not just paying my dues and coming to see the speaker and going home. I’ve done quite a few offices for this guild, even though I live in King City. I have been treasurer and I’ve been program chairperson and workshop chairperson, and I did block of the month. I was on a committee where three of us designed and produced and hand-quilted an opportunity quilt—that’s the one we make for the quilt show and sell tickets for it. And my friend Bev and I did the small quilt auction for about seven years.[2]

These days, Marilee and a friend plan the King City guild retreat: it’s held at the St. Francis center near Hollister and attracts 30 to 35 people every November. Retreats like these are another way she gets to make quilting friends and enjoy quilt talk. Then there’s a large, biannual retreat in Redding that she particularly enjoys, and smaller events in Eureka where she and her husband have a second home.

Between the guild meetings, retreats, classes and quilt shows (I just came back from Road to California, but I don’t think I’ll get to QuiltCon—it is the same weekend as the Watsonville show, and I never miss the Watsonville show), Marilee still relishes quiet time with her sewing machine and her stash. Several years ago, however, she was denied even that when a broken arm left her unable to cut and sew. Not to be deterred, Marilee took to the quilting blogs and to Pinterest, and began to appreciate the modern quilt movement.

A particular inspiration? I love Jackie Gering…I saw those pictures of the white background and the bridge pieces, and then her quilting on it, oh my gosh. I had to dig [for more images of her work], and then I read everything. I fell in love with her. When I heard she was coming [to the MPQG], I was so excited. Her quilts give me goosebumps.[3]

And so, Marilee veered modern. I said I would never do another block-of-the-month quilt, because you make all these blocks, then you have to set them side by side with sashing. Still, she’d made a stack of blocks: traditional stars, albeit in a neutral palette to suit her modern leanings. I came up with a different idea for them, with a grey background. It turned out to be quite a popular quilt. Marilee named it ‘Way Out in Left Field,’ a nod to her new direction.

It was in the show here, and then there was a callout for a modern quilt exhibit at an art gallery in Ontario [California.] It was in conjunction with Road to California last year. I entered my quilt. It was juried and it was picked, and it was in the show there, says Marilee, concluding with a slight understatement. So that was kind of exciting.

Now I’m wanting to do these bigger pieces that blend into the background, and using lots of pieces with no color…or black and white and some little bit of bright color.

This observation steers the conversation to fabrics and stash. It’s hard for me to resist anything with writing of some sort, Marilee says of her current predilection for text fabrics. You have to add new stuff. There’s no such thing as working only out of your stash. That would just be so boring.

She adds a coda that most quilters will understand. I don’t always have to use it. I just have to collect it.

And what of her stash? It’s pretty much a whole room, Marilee admits. Mostly yardage, not too many scraps. I try to get rid of the scraps. It’s great that somebody makes dog beds now, so I don’t have to worry about the little scraps. And I never go to a retreat without taking my laundry hamper of medium scraps that maybe somebody can use and thin out for me.

Marilee concludes with a most compelling reason for maintaining a stash. It’s hard to [think of] getting rid of it. You know, I might get stuck in my house for a month. Some flood or mudslides might hit. I have to be prepared, she claims, tongue slightly in cheek. Of course, we hope that no such thing happens -- no mudslide, flood or even zombie apocalypse. But if it does, if the worst case were to occur, we are reassured that she can manage for a month of solitary stitching. After all, she began with thirteen.

[1] Published 1990 by Jean Ray Laury. See: https://www.amazon.com/Ho-California-Pioneer-Women-Quilts/dp/0525248382
[2] The MPQG used to hold a small quilt auction in conjunction with its annual quilt show.
[3] Jackie Gering spoke at our guild, and taught a weekend class, in November of 2015. She is founder and recent past president of The Modern Quilt Guild. See images of her quilts, including the bridge quilt that Marilee mentions, at her blog: http://tallgrassprairiestudio.blogspot.com/.