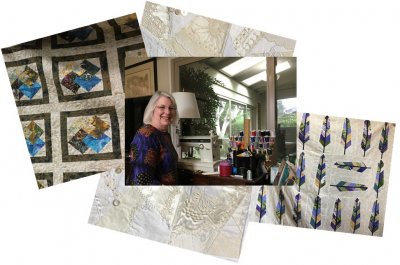 Part of an occasional series in which a MPQG member, chosen at random, is interviewed about her quilting journey. You can find all of the series interviews on our Member Interviews page.

An Interview with Terry Burns

When quilter Terry Burns reflects on her stitching history, she sees two distinct phases, and distinct motivations for each. The first phase began with the promise of a Popsicle. The second began in darkness and loss.

“I started sewing in fourth grade,” recalls Terry. “A teenage neighbor gave afternoon sewing classes in the summer, and she always had a Popsicle for us. I loved it.”

The love grew. Throughout high school in her native Minnesota, Terry sewed almost all of her clothing. “My father was an upholsterer,” she says, “so he understood sewing. He took me aside one day and said, ‘You know, Terry, I can’t buy you all the clothes you’d like. But if you choose to make them, I will get you all the fabric you want.’ And that was my permission.” Her father wasn’t the only family member who encouraged her. “My mother would go to heck and gone with me to choose the right fabrics, and she’d talk me into bolder fabrics because I am tall and can wear them.”

Terry carried her passion for sewing into early adulthood. “When I was raising my two girls, I sewed everything from their underclothes out, except their winter coats,” she says, “And I still loved it.” Amid a busy household, she found that sewing conferred an unexpected benefit: “When I was sewing, it was the only time the whole family left me alone.”

But she set aside her machine—and those rare moments of solitude—to pursue her dream career of managing medical practices. To that end, Terry earned a bachelor’s degree in business, and then a master’s degree. Work and life and family eventually brought her to the Monterey Peninsula, and a career-capping job at CSUMB.

But soon after retirement in 2009, Terry found herself adrift without the rhythms of work. Then she learned that her best friend of 35 years had lung cancer. “She was in the hospital in Sacramento. I’d go up every three weeks and spend five days with her. I did that for about three months, and she passed,” Terry recalls.

“I was really down one day, and talking to my youngest daughter. She said, ‘You know, Mom, I think you’d like quilting. I think that would be a good fit.’” Her daughter’s suggestion, Terry continues, “was the trigger that I had to do something. So I got online and found Craftsy. I signed up for a class and learned crazy quilting. I still miss my friend every day. She was one of those special, special people. But now I have quilting, and I thoroughly enjoy it.”

The second phase of Terry’s sewing life was launched. She bought a pair of quilt patterns, and read the instructions of one. “I got so danged confused because I didn’t yet understand the language of quilting,” she says, so she set the patterns aside and began to figure it out for herself. With her first quilt and all that have followed, she has enjoyed “learning about the colors, learning about the design, and doing the math of it. The creative part and the calculating part: that’s what I love.”

Today, eight years later, Terry remains largely self-taught, though she did join the MPQG about three years ago with her quilter-friend Tamberly Petrovich. “I love going to the guild meetings,” she says, “and I love the presentations. I get a lot of tips. Another thing that speakers do for me: they can have corners that are wavy, or colors that I would never put together, or designs that make me think, ‘I wouldn’t go down that road, but isn’t it gorgeous?’ The speakers [inspire me] to go outside my little box. I really look forward to the meetings because they help me see beyond my normal.”

“And,” she adds of the guild, “they’re a nice bunch of people. They really are.”

Terry quilts in the study of the art-filled home she shares with her husband and several rescue cats in Pacific Grove. Her sewing table and her Sears Kenmore machine—a 45-year-old stalwart—overlook the sunroom, which overlooks a riotous garden. The closet holds a generous supply of fabrics, organized by color and type. Like any quilter, Terry chooses her fabric by pattern and hue, but she also thinks about price. “I try to focus on half-price if I can,” she says. “I don’t mind paying full price if that’s what I need [for] my project. But, to me, a bargain is a kick.”

To that end, Terry often visits the fabric outlet in Watsonville, and a Paso Robles store that features discontinued fabrics. “And of course I go to Back Porch Fabrics, which has a great half-price table,” she says. “If I can find something really reasonable, if I can get the majority of a quilt’s materials for a good price, then I don’t mind donating it. In fact, I love donating quilts.”

Quilts are not all that Terry makes and donates. “I am quite involved with the Carmel Foundation for seniors,” she says. In addition to having served on their Board of Directors, “I’ve done embroidered flour-sack towels for them for about nine years. I donate 100 to 200 towels a year for them to sell, and they put the earnings into their own account” to pay for services such as low-income housing for local seniors. “That’s an important piece for me: to help out, quietly.” And, she jokes, whether it’s quilts or tea towels, donating means that “they’re not in the house. They leave, and that makes room for the next project.”

A chair in Terry’s study is stacked with her current works-in-progress: a trio of red, cream and black quilts that three of her grandchildren will use on their frequent visits to Pacific Grove, and a quilt of pieced feathers, in shades of blue, green and purple. The feather quilt is for a friend with a terminal illness. “My friend, her mother, her daughter and her sister all got feathers tattooed on their wrists as a gesture of solidarity. I loved the idea, and thought of getting one too. But then I thought, I’ll do a stylized feather quilt, and she will know. This is what I can bring to the feather club for my friend.”

This echo of the tragedy that led Terry to quilting reminds her that, as much as the craft has brought her great joy, it also has value in the dark times. “When I am sewing, I focus on sewing and not on other things. It reminds me of playing the flute, which I did for many years. I was never a natural at it; I had to concentrate and read the music. It was so wonderful to me, because when I was playing, I couldn’t think of anything else. I was totally immersed in that little world. Quilting and sewing do the same for me.”

Last in the stack is a king-sized quilt that Terry made at her husband’s request, featuring the card trick pattern in a wash of blue and brown batiks. (She brought this quilt to the July guild meeting for show and tell.) She is now making pillowcases to match.

“We are both thrilled with it. My husband’s very supportive of this sometimes expensive habit of mine,” she says, adding that his stance is usually hands-off. But with this quilt, “I said, ‘do you want to go with me [to the Last Stitch] as I select the thread and how to get it quilted?’ He did, and we had a ball, just had a ball figuring out the designs. When we picked out the threads and picked out the pattern and all of that, it was a delightful time.