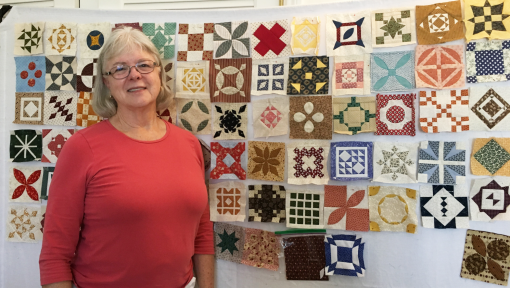 The first in an occasional series in which a MPQG member, chosen at random, is interviewed about her quilting journey. You can find all of the series interviews on our Member Interviews page.

Thomas Edison famously advised that genius was the product of inspiration and perspiration. But what if we consider inspiration and transportation? In the summer of 2017, guild member Linda Phillips is jetting to San Antonio, Texas, to attend the Cowgirl Roundup, where she will be inspired to tackle several of the most complex blocks of her current work in progress: the Dear Jane quilt. (We’ll come back to Jane in a moment.) Since joining the Monterey Peninsula Quilt Guild 16 years ago, Linda has journeyed widely for quilting inspiration. “I have been lucky enough to be able to travel,” she acknowledges. “And every year I try to take one quilting trip without my husband, because it’s a different kind of experience when you go with the ladies.” Linda has made three textile-themed tours overseas with Jeanne Mills,[1] and has attended International Quilt Festivals in Long Beach and Houston, the Road to California show in Ontario, the Pacific International Quilt Festival in Santa Clara, and the Sister’s Outdoor Quilt Show in Oregon. “Some of these are shows I think people should make an effort to get to,” says Linda. “Talk about inspiration!”

But Linda’s first inspiration was much closer to home. As she anticipated retirement from her nursing career, she spotted a woman doing some hand stitching in the CHOMP lobby. Recalling that she had learned to sew as a child, Linda approached the woman who was guild member Patty Kennedy. Patty invited Linda to be her guest at the next guild meeting. “I went to the meeting and decided, ‘hey, this is a nice group of people.’ It’s been an adventure ever since,” she says.

Linda made her first piece—a baby quilt featuring the Ohio Star block—at a Back Porch Fabrics class. She repeated that block in a series of small quilts and table runners, then moved on to other blocks: Roman Square (or Rail Fence), Friendship Star, One Block Wonder, Storm at Sea, and Drunkard’s Path, and many others. Even as her blocks increased in complexity, so her pieces increased in size, from baby quilts and table runners to bed-sized quilts. Linda experimented widely with color, value and block arrangement: her series of four Drunkard’s Path quilts, for example, made for four grandchildren, demonstrates the astonishing variations that a quilt artist can achieve with a single block.

Along her quilting journey, she has held several offices in MPQG, and has participated in quilting groups such as Cut Ups, Valley Girls, and the informal Soup and Bread gathering. “Inspiration comes from the friendship groups,” Linda says. “We really learn from each other.” She also singles out guild members from whom she has learned, and how. “My inspiration for quilting is Sally Miller. Janyce Anderson inspires me for traditional piecing, and Jeanne Mills is my mentor for appliqué and color. Of course, Gail Abeloe is amazing as a teacher, and so is Sharon Winter.”

Linda has participated in guild quilt challenges and quilt shows, trying her hand (and succeeding, if her collection of award ribbons is an indicator) at techniques such as art quilting, appliqué, and embellishment. Yet the first thing she says about quilting is that, at heart, “I am a piecer.” When asked if she has come to enjoy complex piecing, Linda responds positively. “Yes, because I’m good at problem-solving, I like math, I like dimensions. I’m not so good at drafting, but if I find a pattern I like, I can reproduce it.” And this brings her back to her current odyssey. “Did I mention Dear Jane?”

On Linda’s design wall, in the guest room that is her de facto studio, are several dozen blocks in civil war reproduction fabrics, ranging from a simple nine-patch to three-layered beauties that combine paper piecing, appliqué and reverse appliqué, all in five square inches. Linda is applying her love of complexity to reproducing what is arguably the most elaborate conglomeration of blocks ever created by a quilter: the 1863 Jane Stickle quilt.[2] She’s taking several of the trickiest elements with her to the Cowgirl Roundup in Texas, hosted by Brenda Papadakis, the quilt scholar who drafted patterns of Stickle’s original blocks and launched the ‘Dear Jane’ craze. [3]

With roughly 70 unique blocks completed, Linda has some 100 blocks, 52 triangles and four corner pieces to go. As she creates the detailed blocks, she experiments with fabric choice and color, tone and shade, value and repetition. In Dear Jane as in her broader quilting journey, Linda says, she has “gone from copying to adapting and now to asking myself, ‘what do you really want to do with this piece?’ And that’s been the fun thing.” Genius!